Back to softie patterns! If there is anything more due for plushification (or softifaction, or stuffitization), it is the caterpillar. Or "callipitter" if you are, like me, prone to talking funny.

I am a caterpillar nut. I love them. Not just the cute kind or the fuzzy kind or the very hungry kind, but ALL of them. They are awesome. I can conceive of no living figure more wiggly, squishy, and just the right kind of amorphous to be cuddled and wuffled in softie format. Ergo: 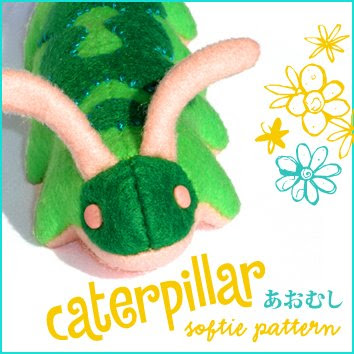 click to download pattern
I wish good luck to anyone who decides to make a caterpillar. This is still an "easy" softie design as soft toys go, but it takes a little forethought and patience to get around the curves. 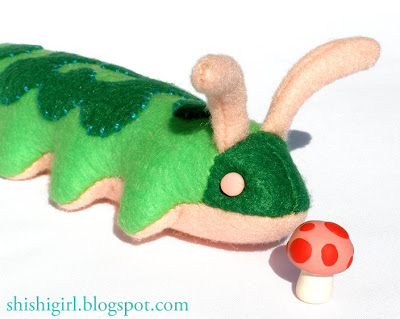 Better shot from the side. His butt looks exactly like his head, minus feelers and eyes - patterns on the back are entirely arbitrary.
Two things to watch out for are:

1) The feelers. These are not stuffed, just two layers of felt sewn against eachother for stiffness, then reversed to hide the stitching. Remember to position them with the clubbed ends aiming IN to the right side of the fabric when you have the whole figure wrong-side out for sewing, else they'll be lost when you go to turn the figure.

2) The darting* on the belly piece. This isn't really hard at all. You're just negating that section of fabric from the total surface of the figure by pinching it to the inside and sewing it up.

In this case, the darts make sharper creases under the caterpillar's legs so that they'll aim downward, rather than just stick out to the sides. Darts are most useful in the "armpit" areas of many softie figures, since they can help direct the angle of the limb or take up unwanted fabric that would otherwise just fold into a wrinkle.

As always, remember to leave a space along one seam so you can turn the figure inside out before you stuff it. It's a little harder to decide where to leave your turning space in this caterpillar pattern because so many of the seams are curvy. I suggest placing the gap along the straight seam that runs right down the back of the caterpillar. You can always cover it up with some applique pattern pieces later. :3

And now, here is a little chant about caterpillars:

Caterpillar, caterpillar, fat and funny
Pick it up and rub it's tummy,
Feed it leaves and watch it play,
And put it back at the end of the day.

...and the simplified (for the sake of rhyme and rhythm) Japanese version:

...the further extranslation of which is:

Caterpillar, caterpillar
Long and cute
Pick it up, play with it,
Put it back, goodbye!

In any case, please have fun. 楽しみしてね~


*I always thought this was called "tacking", but apparently tacking is something entirely different to people who actually sew for a living, so I'll take their word on it.
Posted by Ku at 12:02 AM

Thanks. ^_^ Please do try the pattern sometime!

I attempted to download the pattern but the site couldn't be reached.