Experiment: Glace Icing (and a Lecture)

Not satisfied in the least with the outcome of the last experiment, I have been puttering around on the Internet in search of an alternative method of decorating cookies with hard icing... and wouldn't you know it, there IS one. Lads and ladies, glace icing:

Glace icing is similar to royal icing in that it hardens atop cookies, so it's good for fine decorating and making treats that have to survive transit. Unlike royal icing, it does not require egg whites or meringue powder, so it doesn't taste like you were baking in the forge at a tin mill. Which is nice. 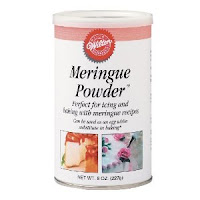 this is nasty stuff
SO HERE GOES THE EXPERIMENT PART AGAIN

I made some more cookies, same recipe as before. Then I got a recipe for glace icing from here, with alterations. There seems to be several variations among professional bakers as to which are the correct alchemical elements in this concoction. There's a general consensus on the confectioner's sugar, corn syrup, and your choice of clear flavored extract. Then, a division: milk or water? And, if milk: whole or skim? 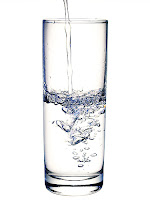 OH GOD SO MANY CHOICES
I can't think of why you'd want to use whole milk in any recipe that doesn't specifically rely on the fat content, and as far as making a sugar-based icing that you intend to set hard, fats and oils of any kind would likely sabotage the effort.

Water offers a unique benefit. The other three ingredients in glace icing are all shelf-stable, meaning they can be left at room temperature in closed containers and will not rot. Using water as the final ingredient maintains this property, rendering an icing that can essentially go in the pantry for weeks (perhaps even months?) in a sealed bottle and be used as needed.

I chose skim milk for this first try, for reasons explained further down the page. There is another decision to be made; how to color the icing? 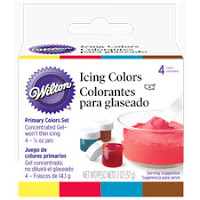 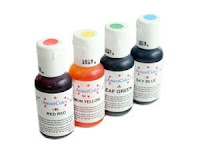 WHY IS THIS SO HARD
...actually, it's not that hard. The liquid food coloring that you buy at the supermarket is the cheapest and most widely-available food dye out there, and it's likely something you've worked with before at kindergarten or in your mom's kitchen. You can also find more concentrated food dyes at specialty shops (and most craft stores, nowdays, since boutique baking has exploded into a billion dollar industry with TV shows and designer brands of icing and tools and competitions with celebrity judges and... wait, am I still in the parentheses?)
Eh-hem. Concentrated food dyes come in two types: gel and paste. There are several brands available, including Wilton, Ateco, and AmeriColor. Both are generally more expensive than liquid dyes.
Now, the sneaky insight part of this post, AKA why I went to college: knowing the nature of your available mediums can help you cheat at achieving bright color.
OH NO A LONG EXPLANATION

Every coloring medium falls somewhere on a spectrum of transparency. At one end, you have translucence; inks and dyes that add their color on top of any colors already present. This is like adding a wash of blue watercolor to black text on a white page -- the white takes on the blue hue, while the black text remains fully visible and unaffected. No matter how many times you wash the page with blue, the black test isn't going to be covered -- you will only supersaturate the page with blue until it reaches the maximum available hue of the ink.
On the other end of the spectrum is opacity. Opaque inks and other mediums have the additional property of coverage. When applied to a page, a completely opaque medium will blot out any colors underneath and fill the area with its own exact color. If you applied an opaque coat of blue paint to the white page of black text mentioned above, you would simply end up with a blue sheet of paper -- both the text and the white background would be gone. No matter how many coats of blue opaque paint you used, however, the hue will not increase in saturation, as it would with a translucent dye; you would be unable to change the value of the one blue shade your paint produced with the first coat.
Applied to coloring foodstuffs, here's the trick: liquid and gel food dyes fall on the translucent end of the spectrum, but pastes fall on the opaque side. (Skim milk (remember?) is also highly opaque.) Glace icing itself is semi-translucent and will not provide an opaque "ground" for brighter colors to "stand" on. If you use add some white food coloring paste to your icing, you are infusing the icing with this necessary ground, which means you can get away with using the cheaper translucent liquid food dyes to achieve your full spectrum of color. Using skim milk (rather than water) in the composition of the icing further enhances this opaque white ground quality.

To get bright colors with minimal investment in specialty food dyes, use about 10~20 drops of white paste food dye when you mix up a batch of icing, then divide and color it with regular liquid dyes from the supermarket. (You can always invest in a full spectrum of pastes and gels later if you decide colored icing is your calling in life.)

SO THAT IS WHAT I DID, with American "bright white" paste found at the Hobby Lobby* up in Phoenix.
Outcome:
Conclusions

Glace icing tastes GOOD. Not as good as buttercream icing (frosting), that soft stuff on cakes that I could eat by the spoonful (and have, on occasion), but glace is dramatically better than royal icing. If I could fault it for anything, it'd be that it's on the upper edge of tolerable sweetness... but paired with a crisp buttery cookie, this works to the sum benefit of both.


Glace icing is easy to make. Four ingredients, none of them exotic, no need for an appliance beater or special paddles, no time limits. Also can be made to last weeks without refrigeration if you use water in place of milk and keep it in sealed containers. You can't beat that.
Glace icing hardens exactly well enough. It takes a drying time of 24 hours (or more, for thick icing on big cookies), but glace does reach a point of stability beyond which it can be stacked, packaged, and mailed (by parcel post, even). It does NOT become crystalline-hard, like royal icing. One thing you need to be careful about is letting the piped outline set up before flooding the interior...and glace icing tends to form lower barriers, so don't overfill: 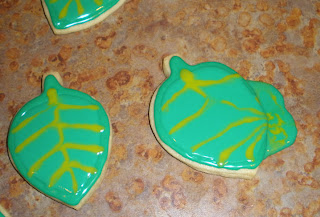 ...but also, don't underfill, because glace icing sinks as it dries. This didn't seem to be as much of a problem the first time I made it with skim milk, but subsequent batches made with water seem to sink down in the middle. I'm still hoping to figure out if the water is really the culprit, or if it has something to do with the dry atmosphere to be found in any kitchen in the Arizona desert (4% relative humidity, woah).

Glace icing tends to blur a little at the edges between colors. Both milk and water recipes showed this effect... it's like a 2-pixel feathering, if you're familiar with photo editing software. Again, this might be caused by my own inexperience at the technique, the weather conditions in Arizona, alignment of the planets, or butterflies flapping their wings in Africa. Or it could just be intrinsic to glace icing.

High-gloss only. The corn syrup, an integral ingredient for stability of the icing as it is applied to the cookies, gives glace an inherently shiny finish. This is the exact opposite of the flat, solid look of royal icing. Not too much of a price to pay for the improvement in flavor and ease of production, but it means that desirable hard shell of matte candy color remains out of my reach... for now.

Aaaand that's the end of that particular experiment, thought I am still making cookies and glace icing. Like I mentioned up there somewhere, these iced cookies ship well, and I can't think of anyone in my book of addresses who could not use some cookies right about now. (Honestly; can you?)

(...and still channeling Gladys after a weekend of Portal 2 jokes with my sister.)

That Which Has Been Going On:
* post coming soon
Posted by Ku at 1:41 PM 4 comments