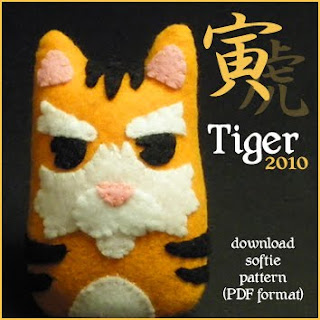 Finally, a new pattern. I've been away from playing with felt for a while (largely because I still can't find where the movers packed it), but by the awesomeness of Nikki-the-Great, I had some special Japanese felt in reserve. (Just enough orange for a tiger -- Taihen doumo, Nikki!) 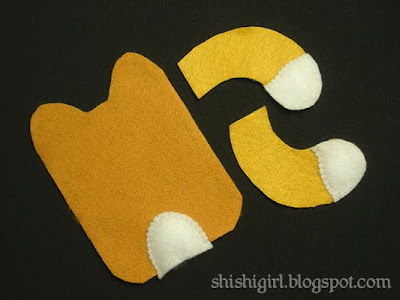 ONE: sew tummy and tail tips onto the right sides of fabric 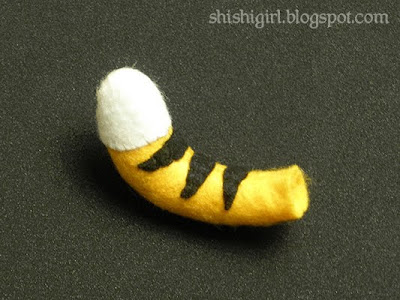 TWO: make the tail
This involves little more than putting the two tail panels right-sides-together and sewing around, remembering to leave the base of the tail open. Turn the tail right-side out, stuff it with fluff, and maybe add the applique stripes now, because it's harder to add them once the tail is attached to the body. THREE: attach the tail
The "top" of the tail, that being the inside of the curve, should be facing the right side of the back panel. You can pin or baste it into place, whatever works for you. 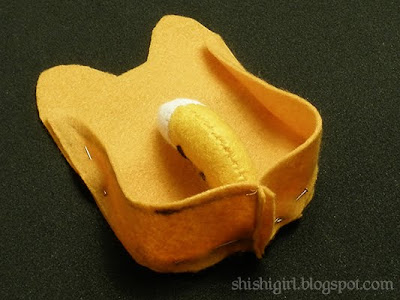 
That long pointy piece provides both the bottom and the sides for this type of softie... it's built on the premise of a lunch bag "wedge" shape. Again, pin or baste it into place, making sure that it's relatively centered and even on both sides. (Ignore the seam in the middle of the piece I used here... I needed to improvise a longer piece from a tinier shape.) 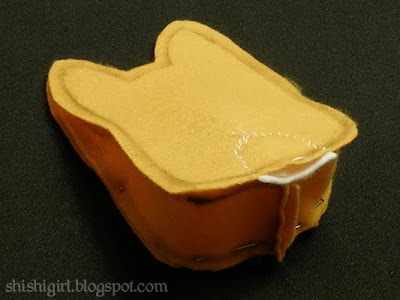 FIVE: attach the front (face) piece
Just a reminder, all these pieces are facing wrong side out, right side in, with the tail hidden in the middle. Sew everything up, and remember to leave a hole of roughly 3cm unsewn somewhere, so you can invert your tiger and stuff it. (Ha, that sounds like a poorly-translated insult... "hey buddy, you can go invert your tiger and stuff it for all I care!") 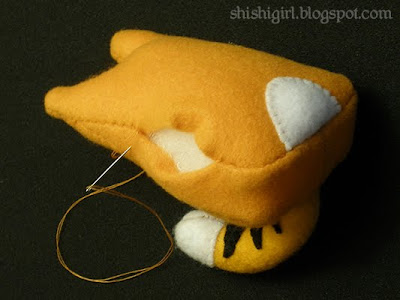 SIX: invert and stuff
If you did everything right, you should now have this: white tummy on the front, tail attached at the bottom of the back. Now we get to stuff it up. If you want to make it more stable when it's sitting up (a good idea with this design, cause the bottom is so narrow), put something a little heavier in the bottom. I like to tape 10 pennies together and set them in as a weight, or make a little sack of rice out of some scrap fabric and put that in there. 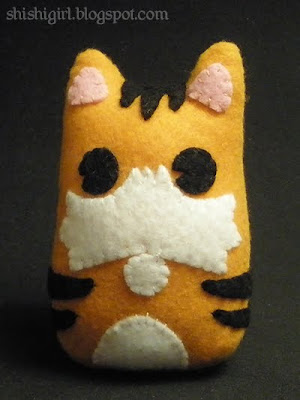 SEVEN: applique like crazy
I like this part... usually. Small pieces can be fussy sometimes. Using thread the same color as the piece you are attaching, applique the first layer of pieces onto the face and back of your form. I say the first layer because some of the pieces go on top of others. There is no special stitch to use: blanket stitch gives a nice edge if you have shiny thread or embroidery cotton, or you can just tack the pieces on with even stitches like I did. (Don't pull the thread too tight, else you'll get a wiggly scalloped edge on the applied pieces.) 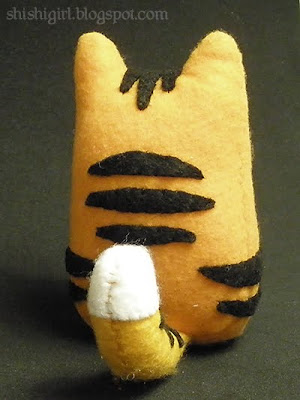 EIGHT: back view
Once the stripes are on the back of your tiger, you're done there. (Note that the two stripes on either side go all the way around to the front.) As for the face... 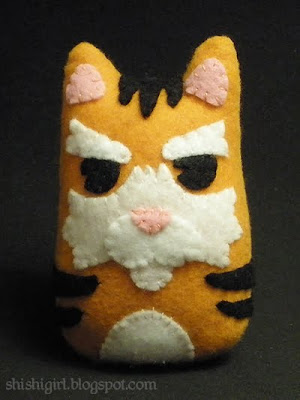 NINE: 出来上がり - done!
Add the muzzle, eyebrows, and nose -- you now have a funny-looking Sack-o'-Tiger™ of your very own. おめでとう、congratulations! :D
So anyway, I hope to be around more often now. My sincere thanks to everyone who's been stopping by the blog, even while I wasn't posting anything new. You guys really cheer me up. m(-_-)m
Posted by Ku at 5:00 PM

Gorgeous. Will make some for my friends...and myself of course.

That's adorable! I made a felt tiger to send to my host family in Japan--there were so many little pieces, it was kind of tough and took a while to make!

Aww, this is DARLING! Thanks so much for sharing, I'll be linking to this.

Yeah, the little pieces are always a bear to work with. Sorry about that, Megan. -_-; Maybe it'd be a good pillow, if one were to triple the size...?

iTsukiちゃん、Leisa, hello! I don't believe we've met before. It's a pleasure! Yoroshiku onegishimasu!

Rachel, thanks to you too! I really, really appreciate your links! :D

I am on sort of a felt-plush dry spell right now, too, but hopefully I shall has something at least started soon so's I can find more things what to put in boxes for Ku's >.>

Hehe, Ku, we've met before, this is Kristen.

Nikki, nooooooo~ donnae dare yew send me boxehs, I have to send YOU boxehs!! >,< I am like two boxehs + many letters behind, wharrgarbl. ;_;

Hi, Carlsburg! ...really? It's working for me on both Mac and PC as of the timestamp below. What kind of error or damage did you encounter?

The tiger is sooo cute!!!! >w< I made one for myself but umm enlarged it to 4Xs so now it's sitting on my bed and it is an awesome hugable plushie XD

Your tutorials keep me happy. I love this tiger. I'm making one now. =) Thank you.

This is amazing! I want to try!

I wish I could make this but the link isn't working :(