It's a good kanji to know. It's also a useful thing to be able to make.

It's even more useful if you can make one from a single sheet of paper, without glue or tape or anything.
便利な漢字。便利な作れる物。そして、紙を一枚でボンドなしもセロテプなしも作れるのが最高。:D

The pattern as given, when printed on a standard sheet of letter-size or A4 paper, makes a box roughly 2.5 inches square with a depth of 1 inch. It is the perfect size for two cookies, one atop the other. Like maybe chocolate & macadamia nut cookies. For White Day. 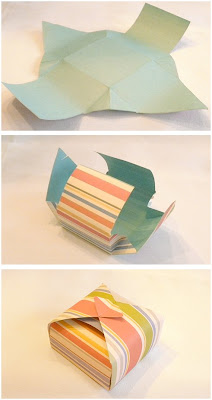 ...see how easy it is? This is why I love paper. >w<
Here are some pre-colored versions of the pattern for your cutting-out-and-folding pleasure. Background designs taken from traditional Japanese repeating patterns, as available on Ikiya.

いやだ、orange comes out so badly on this screen... I need to calibrate.
Posted by Ku at 3:35 PM 0 comments

Where Ku has been since last post:
Yeah. Crap. That last one is really trouble. -_-;

One possible way to alleviate the situation would be to sell stuffs on this very blog. Maybe. If I can figure out what sort of stuffs people want, anyway.

Back later with some patterny goodness, in preparation for おひな祭り、Ohina Matsuri, the girls' festival of court dolls. 待ってくれ、ね。
Posted by Ku at 6:38 AM 5 comments