Having moved into the new Ku House (and getting all my boxes of crap garbage stuff back from storage), I've been coming across tons and tons of old "kiddy grade"* art supplies that I've never used. They include cheapo oil pastels, which aren't really oil pastels like those you might find in a box at an art store labeled as such, but rather the waxy, hard stumps that come with colored pencils and questionable watercolors in a wooden box that gets billing as a hundred-piece kit for little artists. I received these lovely presents from family at Christmas... and again on my birthday... some 10 years ago, when I did more illustration than making-of-stuff. The sentiment was (and still is) much appreciated, but I now have a collection of some 70+ chunks of highly-pigmented oily wax without a cause. Furthermore, none of the charities around here will accept art supplies. ;_;

Here's what happens when you put pastel crayons in the oven.

First up, I tired drawing on a piece of scrap board, conveniently broken into size by my sister via Taekwondo practice. The pastels didn't take kindly to the surface at first, so I softened them up a bit by holding them over a lit candle for a few seconds at a time. They got all smeary. I put the colorful, smeary piece of wood in the oven at 225 for about 20 minutes.

Well, okay. I was hoping the colors would mesh together more than they did and smooth out a little. I also wasn't expecting the oily halo on the wood, but that's kinda cool. The oven did take care of the loose crumbles of pastel that clung to the board... you know, the kind that you have to pick off really carefully, otherwise you brush them accidentally and they leave little streaks of stray color all over your picture. Additionally, neither this nor any of the rest of the following procedures produced any bad smell; there was only a light scent of wax when dealing directly with the hot piece as it was removed from the oven.

Next up, melting the pastels and dripping directly on the board. If rubbing warm pastels on the surface of wood made them stick half-heartedly, surely dripping hot melted pastel from a few inches above would give greater adhesion. Less control, of course, but that wasn't really my interest any more -- I just wanted to make pretty colors. After dripping (and it wasn't quite as drippy as I expected), I put the board into the oven again, this time at 275 for 15 minutes.

Flammability was not an issue. :D
The colored patches meshed together a little better, and even traveled across the board... while in other places they didn't blend at all, just met and evened out. Also, I had a lot of little bubbles pop up from the wax. They left a sort of mottled surface texture. 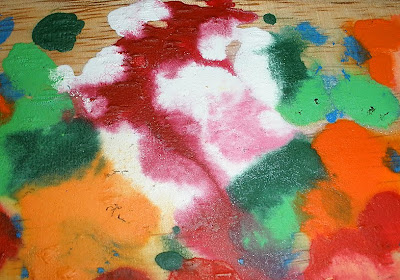 Lastly, I wanted to try making a wacky crayon. You can recycle broken wax crayons into a shiny new chunk-o-crayon that looks exciting to little kids (and anyone easily distracted by bright colors, like me). It seemed like waxy pastel crayons might benefit form the same treatment. I got a piece of tough old tupperware, broke bits off the pastels, and jumbled them up in the tupperware mold. A metal mold (like a muffin tin) would be the safer choice, but I didn't have one of an acceptable size. The piece-filled mold was placed on a scrappy baking sheet for the sake of stability and catching any melt that might bubble over. This ended up not being an issue at all, as the pastels melted and sank to the bottom of the mold without any spitting and very minimal bubbling. 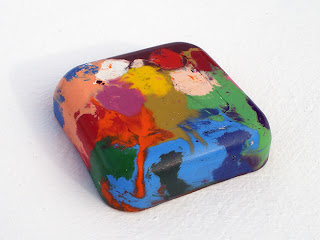 ...not at all worth eating, but visually intriguing, nonetheless.

EDIT: And, at Keira's insistence, here is how it draws: 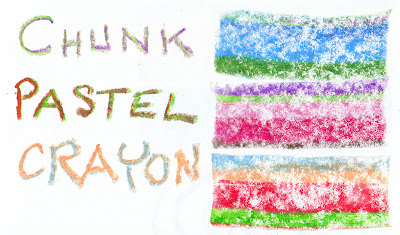 The pastels did in fact melt just like normal crayons do, and the tupperware was not affected except for some colorful residue that I scrubbed out later. I should mention that there was a layer of translucent, cloudy oil/wax that formed on the surface of the block as it was forming in the oven. When cooled, this layer was the same consistency as that of the colorful block below it, but rubbing it on paper produced no color. I shaved the layer off with a craft knife before taking the image you see above.

In conclusion, one can indeed put cheap pastel crayons in the oven to produce various effects without fear of immolation, explosions, bizarre and persistent smells, or ruining the oven with little waxy splatters. The actual quality of the effects achieved remains debatable... but experimentation is always preferable to throwing away unused art supplies.

*In truth, there is no such thing as kiddy grade or student grade materials; you can make real, sincere art out of anything -- the only limit is the artist's vision. :D
Posted by Ku at 9:41 PM 5 comments